Article 5 and a Tentative Schedule

My Article 5 has been dropped off and should be picked up after the Dragon Boat Festival holiday, hopefully June 23rd. Then the TA wait begins. For many it only takes about a week, but unfortunately several families have been caught up in longer waits of over 2 and even 3 weeks. While we could possibly travel the last week in July if everything aligned right, I have spoken with my agency and our tentative travel dates will be in August. If the next steps proceed without delay, I hope to leave on August 6th. That would mean getting David on August 10th and a consulate appointment on August 17th and flying home August 20th. It would also mean we celebrate Bobby's 9th birthday here in the US and then about 2 weeks later celebrate David's 12th birthday with him in China. This way I will also hopefully have an extra adult along to help. Bobby has had more difficulty with falling, especially on uneven ground and has great difficulty with stairs, so I think it prudent to have another pair of hands along since China is not known for it's accessibility.

I sent off for both Bobby and my Chinese Visas, so that will be another step out of the way soon! Doing that made it seem much more real as far as how close we are to travel. I also received an update on David and a nice video. His favorite colors are green and blue. He doesn't like sponge cucumbers(which is good because I don't even know what a sponge cucumber is!!) He likes to go on field trips, be outdoors and play basketball ( guess I will be looking for a league for him to join!) They describe him as an extroverted, happy child who likes to help others <3 "He is very happy to have a family and is anxious to meet his family"(which I think probably should have translated "is anxious for his family to get there" as most of his friends have been adopted in the last few weeks)

It also looks like the new house will not be finished before we travel. I decided that can be a positive as it will allow David to help set up and choose things for the boys bedroom and playroom. Hopefully that will help him to begin to feel comfortable in this transition and help him understand that he is an integral part of our family.

As hard as it is to wait for the last few steps to be done, Bobby and I have so much planned between now and August, that I am sure time will fly! Considering I need to pack for a short trip to see Taylor, Bobby's week at MDA camp, The RR reunion and China along with needing to pack as much as I can to move (hopefully not too long after we get back from China0, I am sure that there will not be enough time in the day to accomplish all that I want to!

Here are a couple more pictures of David from when the agency went to visit. Very soon we will be there and he too will finally have a family! 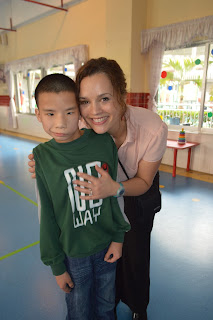 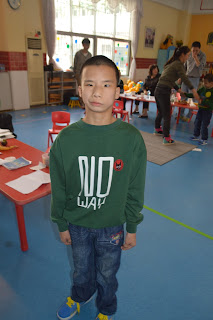