Super Lu here with my report on my latest adventure with the Baird family. We were without internet on this trip so this report is post cruise.

March 31, 2016
Pre- Cruise day-
The van was packed, Mickey dropped off at the pet resort, and we were ready to take off as soon as the boys got off the bus! We were headed south and hoping to make it to Gainesville Florida and have a short visit with Taylor before heading off to Port Canaveral on Friday.

The boys bus arrived right on time and the boys were so excited to start the journey. Traffic was light most of the way and so we did make it to Gainesville, Florida. Then we had a little problem. There was a race scheduled in Gainesville the next day and there were no hotel rooms available in Gainesville, Ocala or Wildwood! So the family only spent a few short minutes seeing Taylor before continuing the drive south. Finally a room was found in Orlando which made for a very late night!

A perk for driving so far and staying at the Best Western was getting some special waffles at breakfast. What a nice surprise! 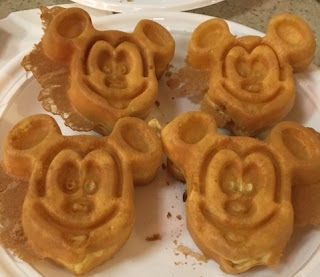 Since we were already in Orlando, a jaunt over to the Character Warehouse was in order! This is the Disney Outlet store and a few items made their way to the van. Bobby modeled a Gaston's Tavern hat since Gaston is his sister's favorite! 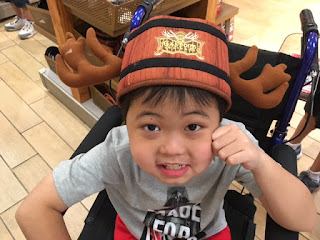 Our journey continued on as we headed towards Port Canaveral. What a sight as we crested the bridge! There was the Disney Dream, sister ship to the Disney Fantasy. Sorry no photo because this reporter was too much in awe and Beth was driving. We checked in to the Country Inn and Suites and relaxed for a bit. We then headed to Fishlips so we could wave off the Disney Dream as she set sail. The boys enjoyed some Sprite and Beth had a delicious Key Lime Colada. Dinner ended up being yummy pretzel sticks with cheese dip and also some spinach dip with chips and bread. The highlight was being able to wave to the lucky cruisers on the Disney Dream as she sailed out of the port. We knew that tomorrow, others would be standing in this same spot waving at us! 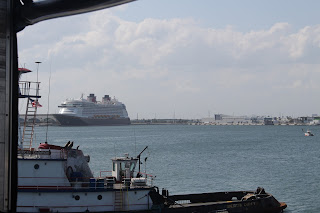 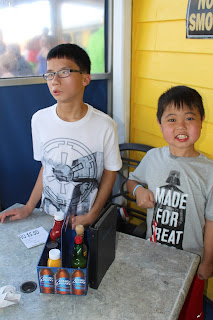 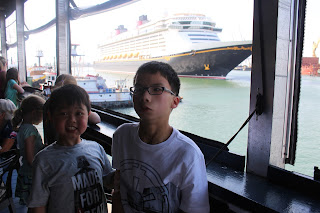 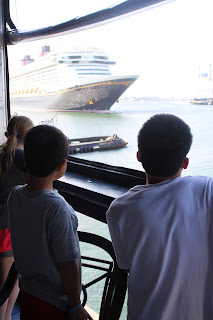 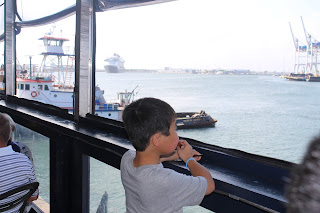 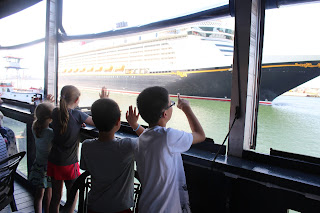 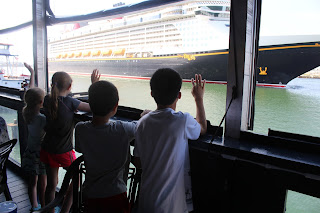 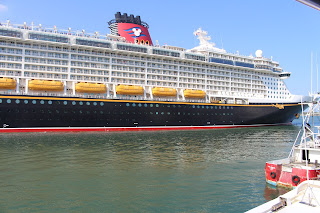 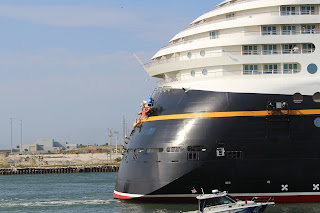